The RH Bill in current debate. “Reproductive Health” or “RH” has everything to AGAINST reproduction and AGAINST health. It is a “double speak” phrase… whose phrase actually means the EXACT OPPOSITE. The proponents of the bill has its premise that it is the Filipino People… that is the cause of poverty… that people must be mandatorily taught their brand of “Family Planning” = how NOT TO reproduce by giving them Disease Causing anti-reproductive pills, injectables, patches, iuds and calling those “essential medicines”.

The Pill (and other forms of it) kill and causes disease according the this video below. (And to any real HEALER worth.)

The Pill Kills Women from American Life League on Vimeo.

Real sex is a good thing. Real sex is healthy. This RH Bill tells you that Real sex is a bad thing… that for sex to be “SAFE” you must be brainwashed to USE their poisonous devices, like the Pill Kills above.

The core premise of the RH Bill is that there is overpopulation. Which is not true at all, again referring to the videos below:

As you can see from the graph below, just as the video said, total fertility rates are going down around the world and going down in the Philippines and has been going down down down for 50 solid years.

They don’t want you to see this graph. Pass this graph to your friends and family and share it with your pro Philippine depopulation RH Bill supporter friends. Let them try to DEBUNK this graph. Let’s lay out all our cards, let’s show the math, show the numbers, show the figures.

Just like a corporate CEO and upper management, they can’t make decisions blindly. They need to be shown the figures. The national figures… show this RH Bill is redundant, not needed, a white elephant because people are already contraceptive and getting more so each year… the graph is undeniable. The figures are undeniable. This RH Bill relies on FALSE ASSUMPTIONS… relies on YOU NOT BEING SHOWN THE NATIONAL FIGURES. 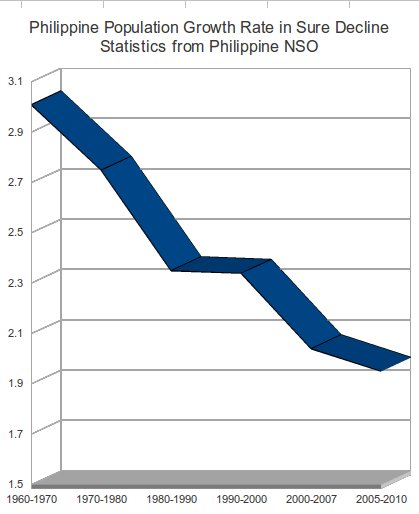 Kill the RH Bill now and forever more. They have been refiling the same RH Bill for more than a decade. They cannot dupe everyone because this is the age of information. They can’t fool 21st century Filipinos who have access to the internet and CAN READ.

Share this article with your media people, your congressman, your senator and your president. Stop the RH Bill madness.