Well, well, well, our collective family efforts are paying off. What was once suspected as some sort of fracture turned out to false. What was worse was that a trusted government hospital doctor prescribed “Partial Hip Replacement” and purposely with holding the x-ray technologist reading of our 94 year old grandmother. This just reeks of Partial Hip Replacement Fraud! And a dangerous fraud it was because if our family had somehow agreed to such risky surgery we may have lost our grandmother.

If you have been reading this blog, you will have noted that grandma had been visited by 3 separate specialists: The vein and tendon healer Beth Pantilone, the acupuncturist, bone setter, traditional chinese medicine and advanced 21st century holistic healer Barefoot Doctor of the Future Sifu Jen Sam, and the dorn and energy healer and anaesthesiologist Dr. Bien Castro.

Actually Dr. Bien did not do his dorn magic on our grandmother but pushed for the x-ray to find out any possible fracture. We got the plates, but not the x-ray technologist interpretation, and got a prescription for Partial Hip Replacement… based on NOTHING. Sifu Jen Sam says from the looks of the plates, there was no fracture, so he went on with hip dislocation fixing. He has visited 3 times.

The vein and tendon healer Beth Pantilone had also visited grandma 4 times. Today she says grandma’s veins are in order. She is now working on her tendons / “litid” in tagalog. She feels only 3 more visits by her and she will be able to walk again.

Visited grandma today. I was pleasantly surprised to see her seated and eating her lunch. She was attended to by her eldest daughter who flew in just to visit her. At times grandma would even feed herself with a spoon.

The last problems are her back bed sores. I had again reminded now berated my attending aunt that it has almost been 4 weeks and they had not raised the bed by 4 to 6 inches at the head board to have effective Inclined Bed Therapy (IBT). It is IBT that should allow her bed sores to heal while she is bed ridden. The incline allows gravity to do its job on the almost bed ridden body, optimizing circulation. I hope they finally do it today.

Last week grandma finished a few boxes of Japanese natto for her vitamin K2. Today I gave her some Brie de Meaux raw cheese for her vitamin K2. Vitamin K2 is meant to put calcium to good use in the bones and in the teeth, away from arteries and away from tartar. I also left a kilo of smoked deer which she liked a lot from the last time.

So a few more visits with Beth and Sifu and grandma should graduate to a walker before the end of this month. Wish us all good skill and a little luck. 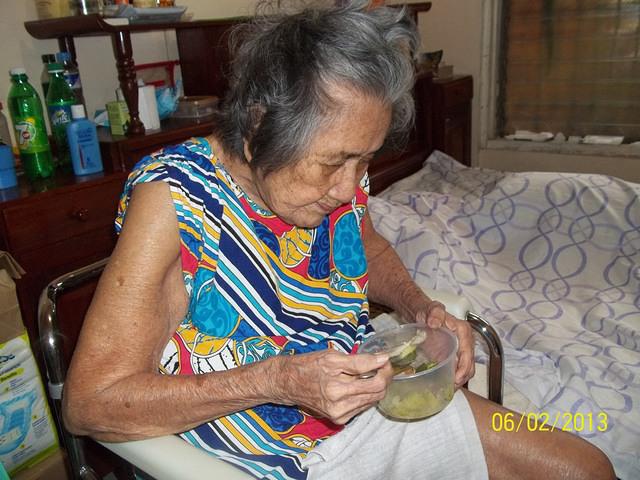 See grandma eating with her right arm and hand scooping her food. That right arm used to be immobile. The acupuncture and the vein plus tendon healer cured that right arm. Grandma is now totally lucid and conversational. Much more conversational today than many years ago when she used to take her “heart” medications until her daughter flat out said NO TO ALL HER DRUGS.

So why are we having some good success with our 94 year old grandmother? Because we chose some of the best healers to do the job. Because the attending family keeps doing their job. Because all her children contributed for her cure. Because we do not think she is old to the point of death. We believe she was merely injured and she deserves to get well and treated just like younger people. Just like when we saved her from pneumonia at 88 when the hospital in her provincial town declared her un-savable, we did so against hospital protocol.